Posted on November 30, 2020 by Sara Mathur Leave a comment 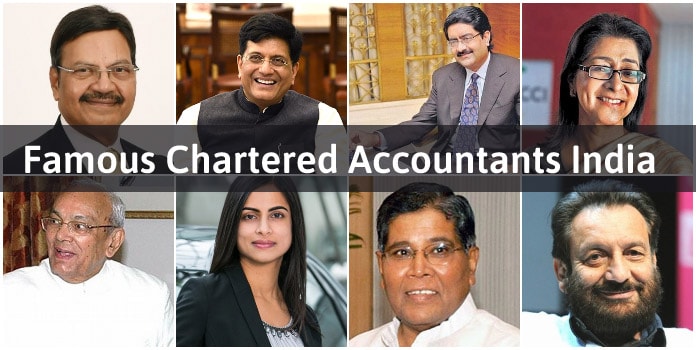 Chartered Accountant has always been one of the most prestigious professions in India. It demands serious focus and hard work to become a CA. India has many reputed and dignified CAs who are the best names in the industry. In fact there are many Indian celebrities, actors, famous female politicians CA in India. There are many names from different industries that fall under the list of famous Chartered Accountants of India.

He has been awarded with Padma Sri for the amazing work he has done in his profession, T.N. Manoharan is one of the best CAs in India who was also awarded with “Indian of the year” award by CNN.

She is the first Indian female to graduate from the renowned Harvard University. At present she is the Country Head and Group General Manager of HSBC in India.

We all know him as the Chairman of the renowned Aditya Birla Group which is one of the biggest conglomerate corporations of the country.

He is popular as the Minister of the Government of India for Power, Coal and New & Renewable Energy. He even achieved the 2nd rank across the country in the CA final exams.

Read also: How to Become a Chartered Accountant After 12th

He has brought glory to the profession of CA by managing his portfolio and that’s why he is also known as the Indian Warren Buffet.

Not only a senior political leader of Indian National Congress, he is also a well known CA. He has served as President of ICAI and also possesses experience of working with different state governments.

The Chairman of HDFC, India, Deepak Parekh has been on various non-executive and executive directorial positions in many companies. He has also been a recipient of many prestigious awards.

Check this: How to Become a CA (Chartered Accountant) in India

He has been awarded as the “Best CFO in India” and has worked with Infosys for over ten years. He is also known for formulating the very first publicly articulated financial policy for the organization.

Indian Celebrities who are Chartered Accountants

There are many Indian celebrities who are also known to be Chartered Accountants and have earned great reputation. Here are some of them:

He is one of the most appreciated and critically recognized film directors our film industry has seen but before becoming a successful director, he practiced as a CA for several years.

A popular Carnatic musician and vocalist, he is someone who once cleared Chartered Accountancy with a rank. Before pursuing full time career in music, he practiced as a CN for a short while.

He has been an active Indian politician who has formerly served as the Minister of Railways and Minister of Commerce & Industry and Civil Aviation. But before that he scored All India Rank of 11 in CA.

A senior Congress leader who is also a member of ICAI has also been an active Member of Parliament of Rajya Sabha.

Not just men, even women have made successful CAs and some of the popular names have been included below:

She is a Chennai-born who pursued CA and was also appointed as the very first woman CFO of General Motors. She also started her career as Chartered Financial Analyst as World Bank intern.

She is the Executive Director of ICICI bank. She is a successful CA and also headed the team which planned and executed the merger of ICICI in 2002.