Posted on March 5, 2018 by Sara Mathur Leave a comment 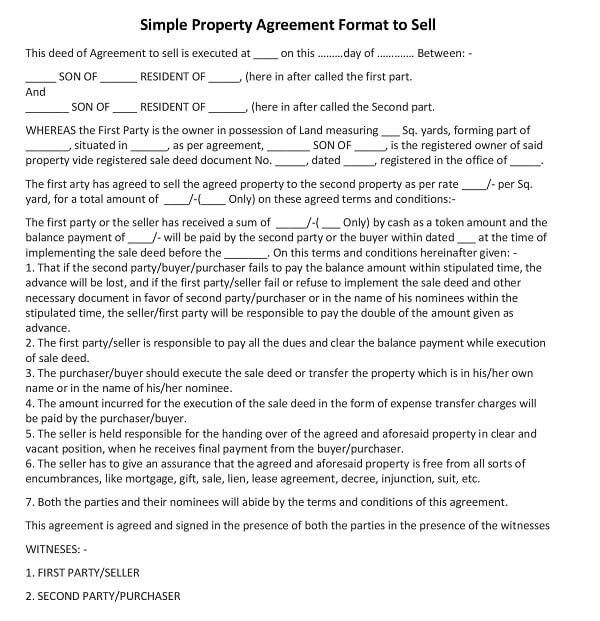 An agreement to sell is a legal document and an important document in the process of sale and purchase. This legal agreement contains the terms and conditions of sale. An agreement to sale is for immovable properties. This can be used as a property for flat, house and land/plot as well. This agreement abides the registration of the agreed property. A sample of a simple purchase and sale agreement is shown below.

You can download the ook sell Property Agreement format in Word and customize it to suit your needs or you can convert this Form in PDF as well.

1. That if the second party / buyer / purchaser fails to pay, the advance will be lost, and if the other party / seller fails. party / purchaser or in the name of his nominees within the stipulated time, the seller / first party.
2. The first party / seller is responsible for the sale and sale.
3. The purchaser / buyer should execute the sale or transfer the property which is in his / her own name or in the name of his / her nominee.
4. The amount incurred for the execution of the sale will be paid by purchaser / buyer.
5. The seller is responsible for the handing over of the agreed property and is in clear and vacant position when he receives final payment from the buyer / purchaser.
6. The seller has an assurance that the agreed property is free from all sorts of encumbrances, like mortgage, gift, sale, lien, lease agreement, decree, injunction, suit, etc.

7. Both the parties and their nominees will abide by the terms and conditions of this agreement.