Posted on December 12, 2022 by Sara Mathur Leave a comment 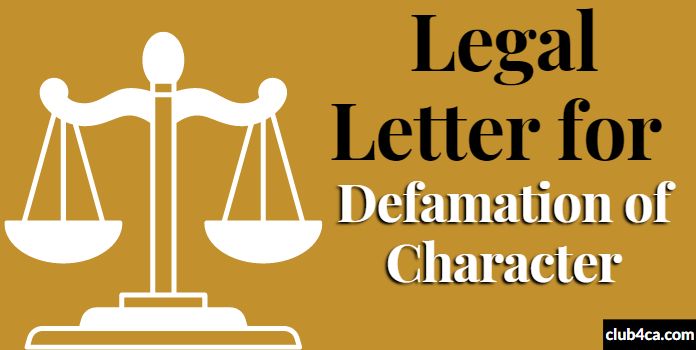 Defamation is the act of damaging someone’s reputation by sayings bad and untrue things about them and in such a scenario, the person can always go legal. The legal letter for defamation of character is usually written by the lawyer and includes the rumours that have been spread about his or her client which are damaging the client’s character.  If you have to form one such letter then you can easily follow the Cease & Desist Defamation of Character Template, Example.

In this post, we have come up with a Defamation Cease and Desist letter sample along with the important guidelines that one must keep in mind while framing such a letter.

How to write a Letter of defamation of Character

Shared below are some points that must always be kept in mind to make sure that you are able to draft a professional legal defamation letter:

Check this: Legal Letter for Breach of Contract Format

Format for Legal Letter for Defamation of Character

I, Andrew Smith, am writing this letter in relation with the defamatory behavior of the employees of your organization towards my client, Mr. Henry Brown. Being his attorney, I would like to ask you to make sure that the order of cease and desist of slander is put into action with immediate effect.

My client is an honored person possessing impressive experience and remarkable character and holds an important position in your office. Of late, there have been rumours about his personal life amongst the employees at your organization. There have been constant rumours stating that he is having an affair with one of the colleagues at work. These accusations are false and have no basis.

It was after the official outstation trip to Los Angles these rumours started. My client initially thought them to be a friendly banter but things have blown out of proportion. My client has made all possible attempts to make his colleagues understand the situation but they are still continuing with their rumours and defaming him.

All this behaviour is harassing my client and now all this has started affecting his peace of mind and has also adversely affected his marriage. He is, at present taking consultation with a psychologist in order to get over all the stress. I have attached with this letter the report from the consultant along with the bills.

I would live to have to order delivered at the earliest with your employees or else a serious legal action will be taken on the grounds of defamation of the character of my client. And in such a case the person is liable by the law for all the charges as well as the payments of the bills of the person.